One would think, if anybody should be afraid of travelling to Iraq, it should be us. But instead, it was an Armenian girl that was frightened, despite the fact that she is in a long relationship with an Iraqi guy. It was her first trip to Iraq, to meet his family. While she was talking about her fears, we were looking through the window at a wired fence that represents the border between Turkey and Syria. 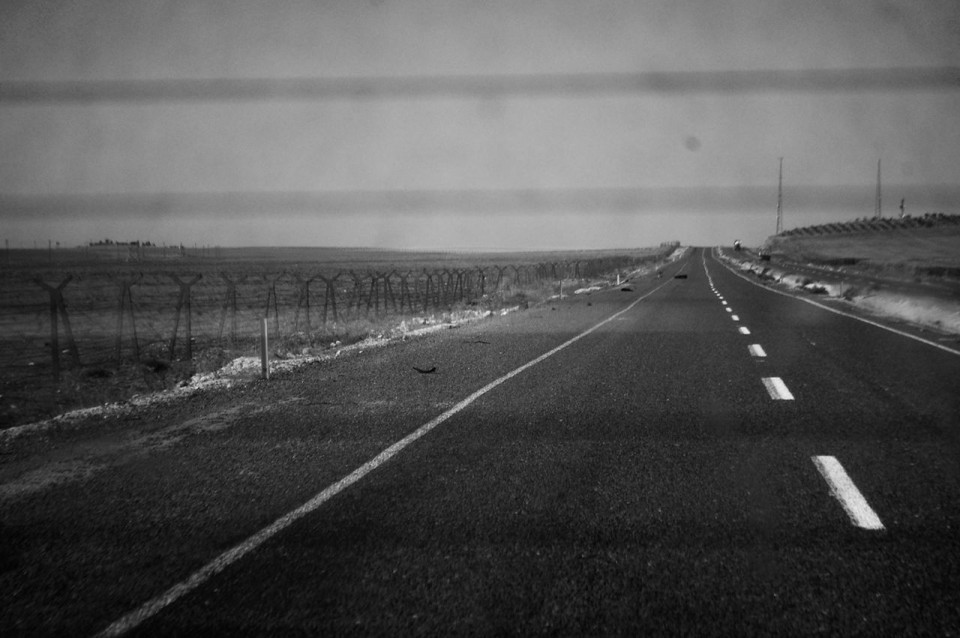 For security reasons, Syria is not on our list of countries to visit this time. Just before we got to the border, we changed taxies. That’s the agreement between two countries. We are trying to pay the rest of our trip with the last liras we have in our pockets, but our driver won’t let us. Maybe he was told in school that Croatia is the poorest country in the world or maybe we just look like two wanderers with no money…or maybe its just that we are likable – it’s a possibility too.

Anyway, when we got to the border, we encountered on a problem – we need to have invitation letter or some kind of warranty, but after a few minutes they found Croatia on the list of countries that don’t need such documents, so we’re fine. They asked us questions about our whereabouts and intentions in north Iraq, or Kurdistan. While we were talking, young boy is offering us with free tea with too much sugar in it. Finally we get visa for 10 days, just like that. It looks like our intentions are much more honest than we thought.

Very soon we get the picture that this is Iraq, but only on paper. Population is purely Kurdish, they have their own autonomy, army, the government and the flag, which is fluttering together with Iraqi flag, on the windy border. And my dad was worried that I’m going to Iraq. Although, I bet someone can find some bad stuff about Kurds too. They say, they red it in the newspaper.

Something about Kurds…they live in east Turkey, north parts of Iraq and Syria, and in northwest part of Iran. Population is around 30 million, and their position in mentioned countries is not that good. Lately there are lot of confrontations between PKK and members of police forces, as well as military of the countries they inhabit. Only exception is Iraq, were they have their own autonomy since 1970.

We are moving on down the dusty roads followed by red-white-green flags on every house on the way to Dohuk. When we got there, we’re saying goodbye to our Armenian-Iraqi couple. Soon after we were dropped in downtown by our taxi driver, and at that moment we realize that our co-travellers left their passports in the taxi, but the driver just grabs his mobile, calls them and tells them where to meet him in a few minutes. I’m telling you, good people everywhere.

We finally said goodbye to our driver, and then we remember that we didn’t send CS requests. Now we need to find some cheap accommodation. Things like that happen, when you’re spontaneous. We found a room in a hotel downtown, which we pay around 15 euros. The room has two beds, separated, of course. We’ll need to play our guitars on the street again, to balance the budget. Well, for now, we’ll just take a walk around the city.

We’re walking, and everybody is watching us, every once in a while somebody stops to take a better glance at us. That’s it – we moved from tourist Turkey to non-tourist Iraq and suddenly we are drawing everybody’s attention. Although, it’s far from curious-shocked glances you get on dusty streets of Bangladesh…

Soon, we bump into something we could look at with the same attention other people looked at us. Exchange office, in the middle of the street. It’s 9pm and there’s this guy standing by the big transparent box full of US dollars and local currency, and if you like to make an exchange, he just opens this box, grabs the bundle and makes an exchange. I can imagine what it would look like, that kind of busy-ness in some Zagreb neighborhood. Or any other safe European city. 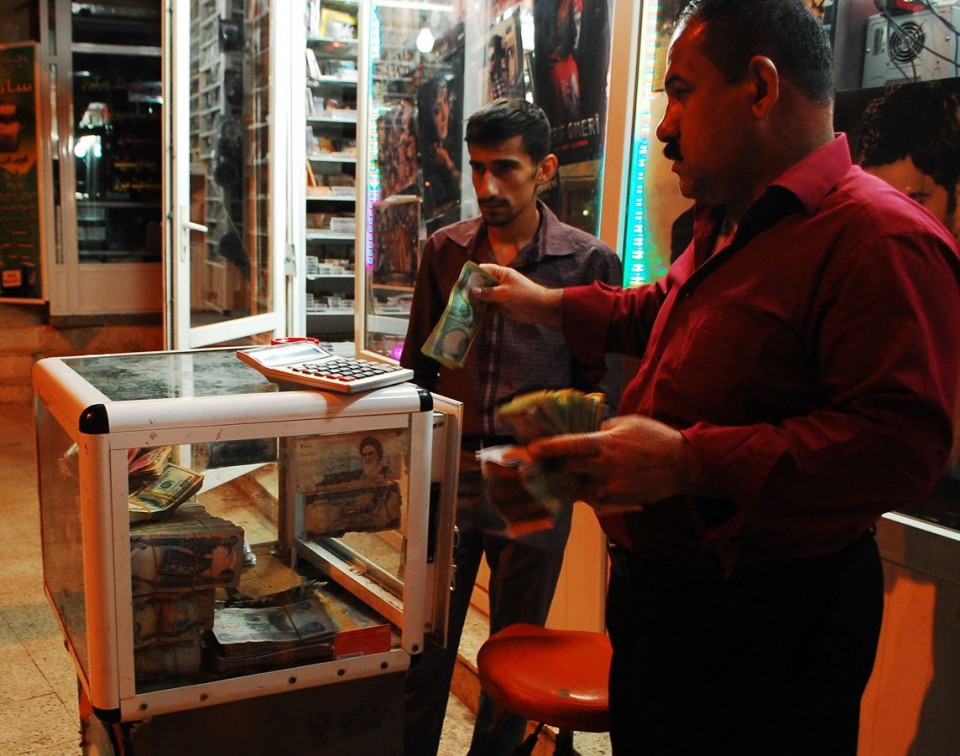 Through dark alleys, in which we feel pretty safe, we get to the amusement park. And that’s the place where party is! Women are wearing their best dresses, scarfs and their shiniest jewelry, because you need to be all dressed up for amusement park! Guys are all dressed up too with the gel on their hair and they are taking rides on all kinds of features in amusement park. It’s Friday night, time to party! 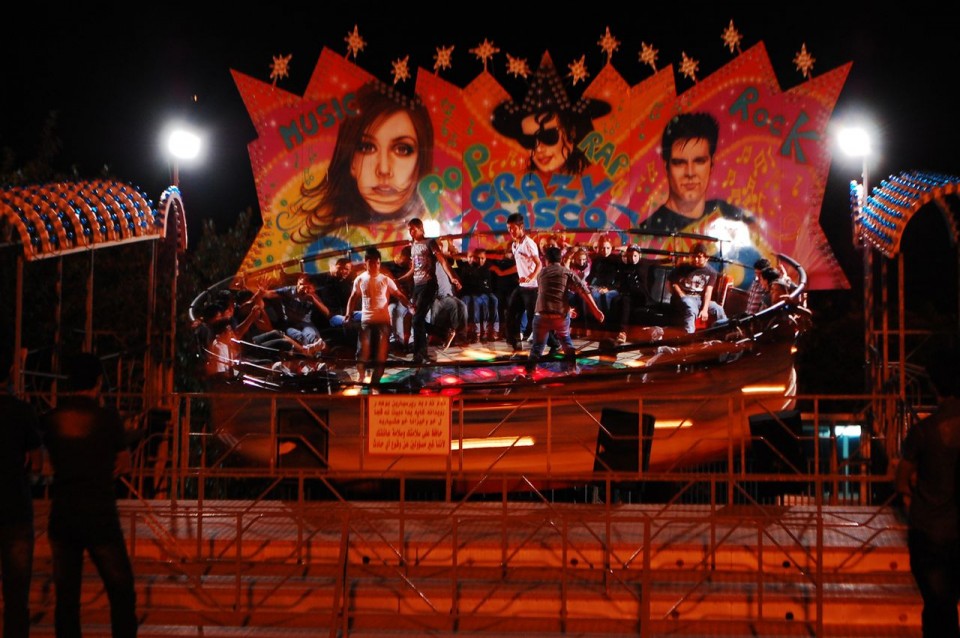 After the morning stroll around local bazaar, we decide to hit the road again, to Gali Ali Beg – famous canyon on the way to Iranian border. We get out of the city in one car, and he drops us off at a military checkpoint. 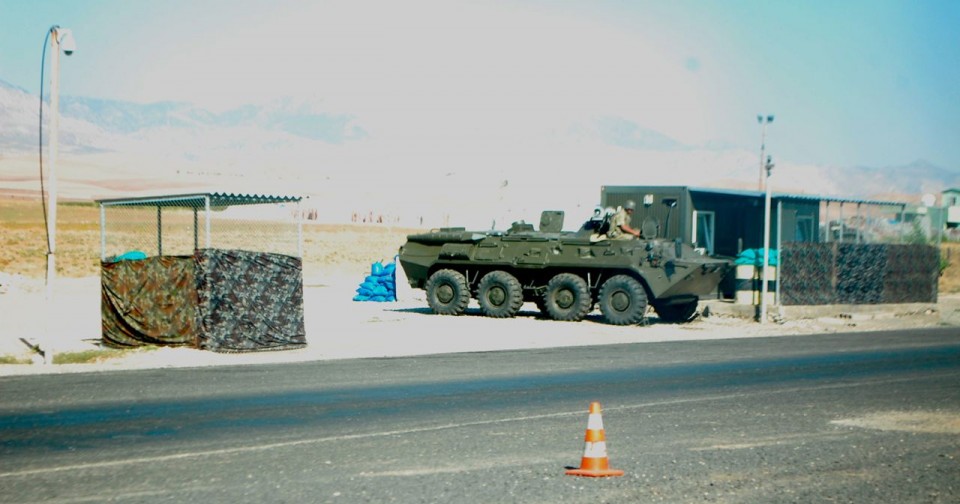 Of course, military is everywhere, but they are pretty friendly and cheerful, and sometimes they just ask for our passports so they are able to chat with us. And they are useful as well, in two minutes they found us the next ride towards east – a truck driver all dressed up in traditional Kurdish clothes. He was silent all the way, but soon we realized that he just doesn’t like to speak on an empty stomach – we stopped for lunch/dinner and in no time there were 22 plates with all sort of house specialties in front of us. Important lesson in these areas – always hitch on an empty stomach. 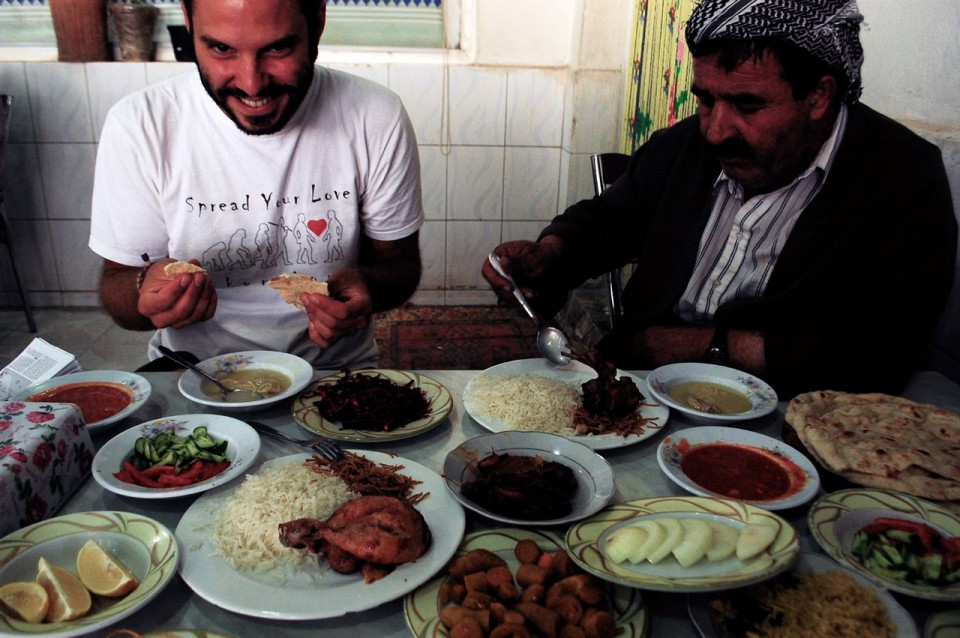 Our driver refuses our offer to pay for the meal, but he doesn’t mind posing for couple of pictures next to his truck. He continues to drive us towards Erbil, in a more talkative mode. He shows us pictures of his wife, then his second wife, tells us he has 11 children, and invites us to his house for the dinner and sleep over. We thank him for the kindest offer, but refuse it – Tanja has a flight to catch in couple of days.

When he finally drops us off in Erbil, we have to refuse at least 20 taxi drivers that stop when they see our thumbs lifted up. But soon, we are back on the way, in a fancy car with a gentleman speaking perfect English and his driver. He takes us for a tea and shows us his factory he owns nearby, gives us his mobile number to call him if we need anything, no matter where and when. He even mentioned some connections in Iran… 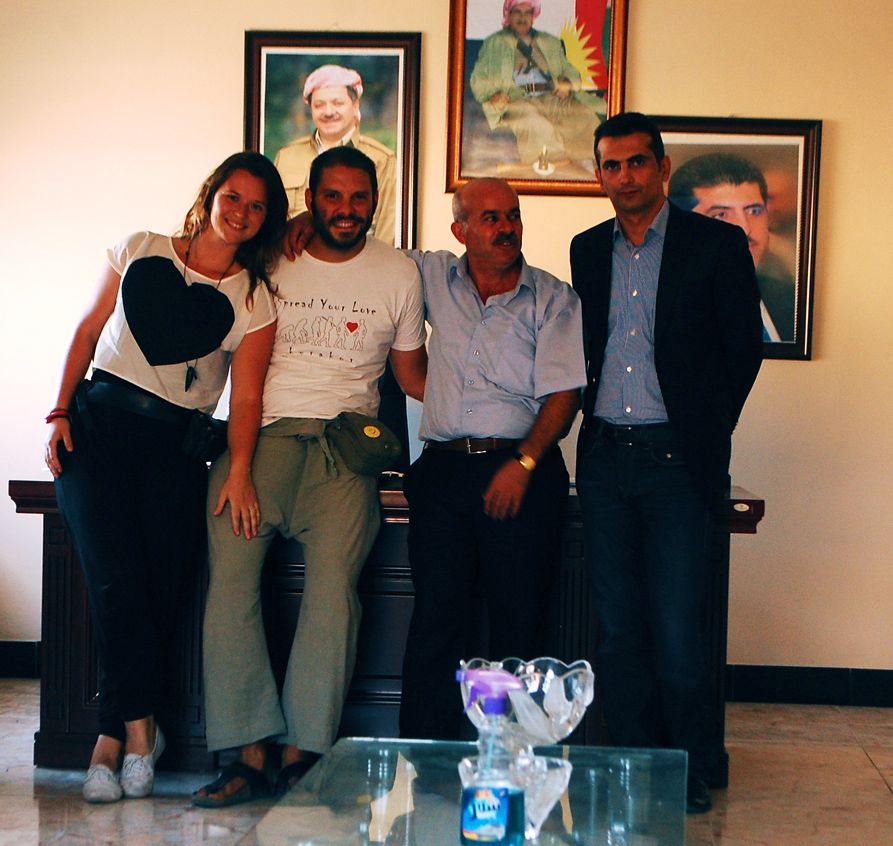 We move from one military checkpoint to another, soldiers are talking to us and helping us to find rides, one driver takes us to dinner even though we haven’t digested that 22-course-meal, and eventually we reach Gali Ali Beg, late late at night. There is nothing there, so we ask the owner of nearby restaurant for permission to camp by the river that passes there. He tells his price – camping 10$, room in an unfinished motel 40$. Our choice is obvious, but first we sit down to have a tea. That turns out to be a great move because we start playing our guitars and after two songs we are surrounded by people dancing around, or just looking at us in amazement.

When we finished our repertoire, the owner takes us in one of the rooms, gives us bunch of blankets and a discount of 100% for the room!

We give him a hug and go back downstairs to finish our concert. There is a group of soldiers there, and my first reaction is that there is going to be some sort of trouble. You know, soldiers on their night out, a fragile guy and his attractive companion…but there are some other guests with small children so we don’t worry too much. At the end, we just had to take pictures with all of them, which was fun. I believe that Iraqi facebook, if it exists, is full of our pictures. We’ll be mutual friends with the entire battalion! 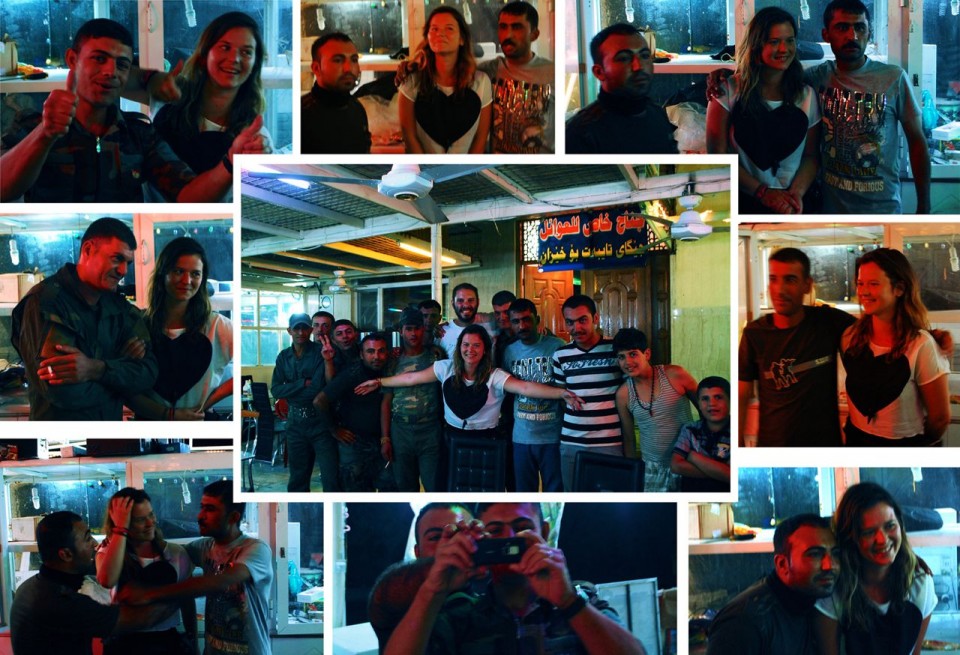 After the gig and the posing, we return to our peaceful corner. Even though, the peace is relative, since we find an AK 47 resting in the armchair, right next to our room. We ask him nicely not to kill us while we’re sleeping (or when we wake up), we lock all possible doors and go to sleep. 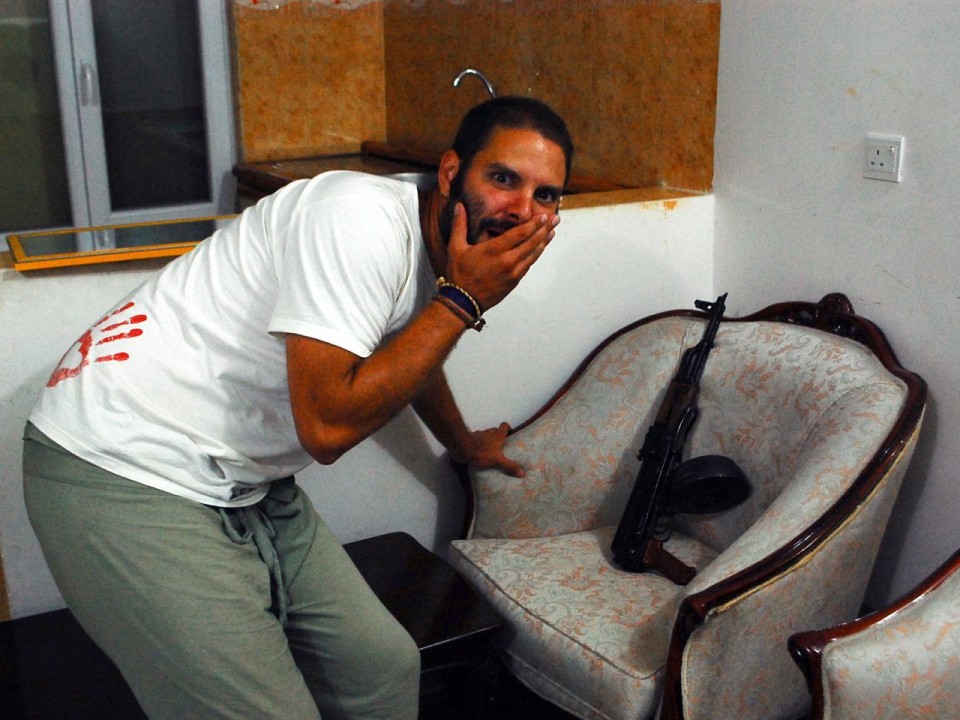 In the morning we are surprised to see a beautiful waterfall just outside of our window, and we soon find out that that is Gali Ali Beg waterfall, the one that is on the background of one of Iraqi/Kurdish banknote. Even though, we haven’t seen them much since everybody was paying for our food and accommodation these couple of days. We start hitchhiking towards the border, but the motel owner’s kindness is still here – he take us 30 kilometers to the next city.

Once we arrived, taxi drivers all around us offering us ride, which we kindly refuse. And when we finally thought that we explained the point of hitchhiking to them, we get in the car and we see one of the guys paying for our ride to the driver. That makes us sad, because it’s not really the point that people should pay for us. The point is that they drop us off somewhere, IF its on their way. The paid driver leaves us on one of the familiar military checkpoints, from where we find the ride to the border. He wasn’t a taxi driver, we checked couple of times. Despite the fact we’ve been told about beautiful scenery on our way to the border – we were breathless. 55 kilometer long road to Iran passes through beautiful canyon, probably one of the most amazing sights I ever saw while hitchhiking. 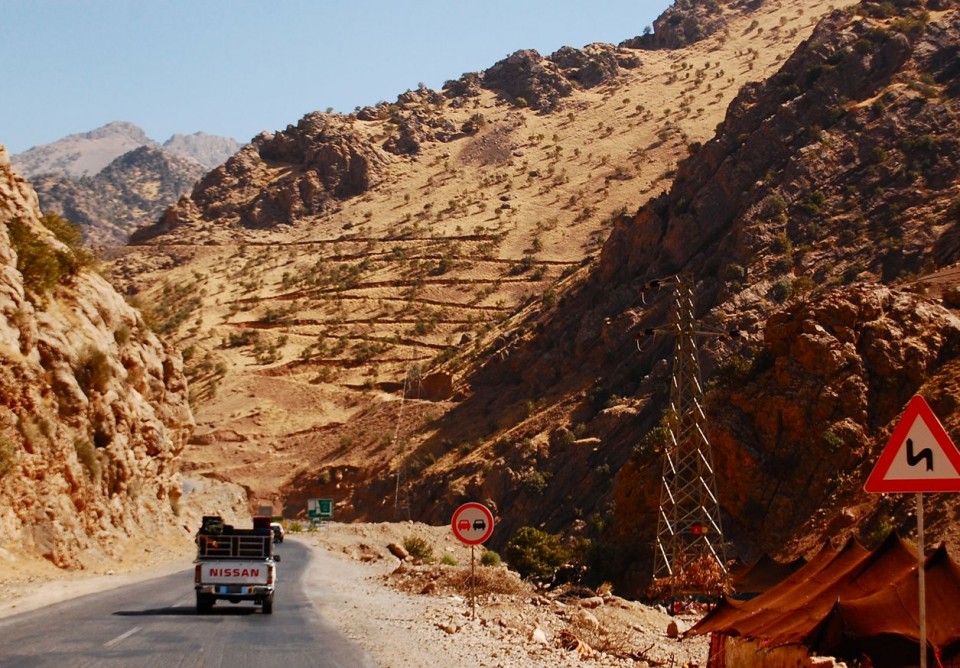 We start talking about countries people see as dangerous, like this one. Always, and I mean always, it turns out that those same countries have the kindest and most generous people. And they are the safest ones. The only negative situation that happened to me in past couple of years was in my home city. When I look back, I can see how many prejudices I have shattered down since I started traveling and meeting all these people with different nationalities. So happy about that, and that’s one of the reasons why I think people should travel. Well, travels are probably not the only way to get rid of the prejudices, but for me they are. The best way so far.